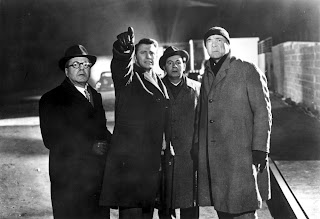 A post to mark the publication of Julian Upton's Offbeat: British Cinema's Curiosities, Obscurities and Forgotten Gems, which was initially available in a limited edition no-ISBN hardback from Headpress, and is now out in widely available paperback. For anyone interested in the backwaters and byways of British cinema it's highly recommended, not least for Julian's pithily precise and often extremely funny writing. I penned a few extended reviews for it a while ago now - on the films X the Unknown (Leslie Norman, 1956), The Day the Earth Caught Fire (Val Guest, 1961), The Earth Dies Screaming (Terence Fisher, 1964), Herostratus (Don Levy, 1967), Privilege (Peter Watkins, 1967) and No Blade of Grass (Cornel Wilde, 1970). Here's a still of Edward Chapman, William Lucas, Leo McKern and Dean Jagger in one of the films I write about, Hammer's X the Unknown.