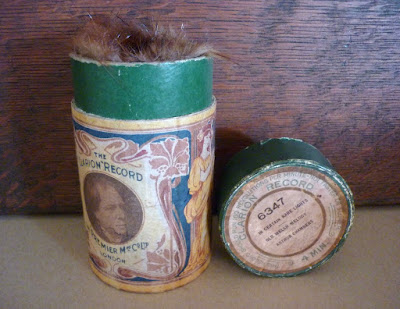 Born in Caerleon in Gwent, but living and working for the bulk of his creative life in London, Machen was a writer of the borderlands, the literal ones of the Welsh Marches to which he returned time and again in his fiction but also the liminal worlds of the uncanny as they manifest in the everyday. His was an ability, as Iain Sinclair puts it in his 2103 essay, Our Unknown Everywhere, 'to recognise holy hills behind a sprawl of suburbs'. Holy hills and shadowy strangeness; his half-hidden worlds of pungent darkness that he conjured in his works required a similar treatment, hence the cylinder is lined with an old dark pelt of uncertain provenance. Works referenced on the cylnder include The Great God Pan (1894), A Fragment of Life (1906) and The London Adventure (1924).
Posted by Graeme Hobbs at 04:09