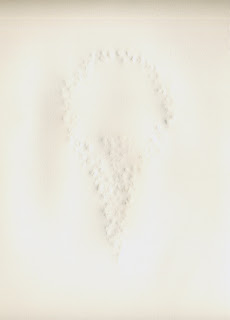 august 09
148mm x 210mm
poems inside flapped pocket with blind embossing
The thousands of rock engravings that surround Mt Bégo, in the Vallée des Merveilles in south-eastern France, are a comparative rarity in that, rather than being produced by a prehistoric hunter-gathering community, instead come from Bronze Age farmers; hence the occurrence in the engravings of metal implements such as ploughs and daggers. I have tried to capture this difference in emphasis in the two poems enclosed here, La Vallée des Merveilles and La Voie Sacrée. The cover design is a blind embossing of one of the engravings from the area.
Posted by Graeme Hobbs at 14:02