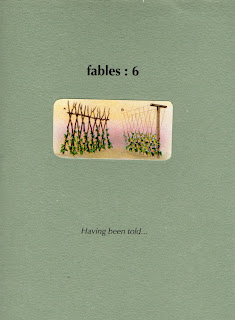 I have printed up a number of stories, written between 2006 and the present day and linked through their singular method of composition, as a series of 'fables'. Here is number 6 - The Walk. My usual ambivalence to titles is plain as the words don't actually appear on the cover, which instead spreads the load between the series, an image - taken, as all the rest in the run, from Wills's 1923 set of Gardening Hints - and the first line of the tale. As for the story, it's a walk of sorts, engaged upon by a man of less than moderate means and fewer prospects, that commences with the promise of springtime hemlines and ends in the middle of his outing, between his destination and his desk. And I rather like the 'Gardening Hints' card I used for the cover, on two ways of staking runner beans. Thus far, I have always gone for the more traditional method of 'A', but can see the benefits of 'B' - a sort of hop twine arrangement to which I shall give serious consideration next year.
Posted by Graeme Hobbs at 03:47